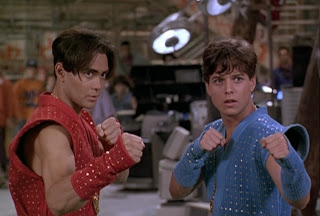 In this, the second edition of You Got Some Video Games in my Movies, I'll be looking at the masterpiece from the director of the 1992 (and '93!) Billboard Music Awards, Double Dragon. My history with the game series is pretty shallow, I'm sad to say. I remember playing the original a few times, but it's a generic memory. A lot of side-scrolling, button-mashing, and...that's about it. As for the movie, I'm a little surprised I hadn't seen it until now. Did I like it? Keep reading if you want to find out (spoilers: I didn't).


Only one year removed from Super Mario Bros. comes Double Dragon, which is surprising, because who the hell would want to make another video-game-based movie after that debacle? Apparently, the star power of Bob Hoskins proved to be too fruitful, so this time around, Scott Wolf gets his much-deserved time in the spotlight. He might be the worst bit of casting, but his inclusion isn't what genuinely makes me mad. Instead, it's the presence of someone who absolutely, positively, 100% should not be in this movie.

Robert Patrick, what the fuck? It's only 3 years after Terminator 2, and this is what you're doing with your life? That is borderline offensive to me, sir. You went from being one of the scariest men of the '90s to this: 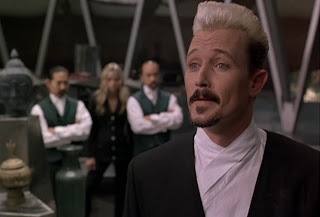 Double Dragon tells the riveting story of two brothers (Scott Wolf and Mark Dacascos) who have one half of a powerful amulet that's able to turn ordinary men like Robert Patrick into shadowy cg-cardboard monsters. Each half is supposed to harness the power of the body and the soul, respectively, but I didn't even figure out which one was which until like half-way through. When the amulet is made whole, magical feats are able to be performed such as cloning yourself and flailing around with fake swords. 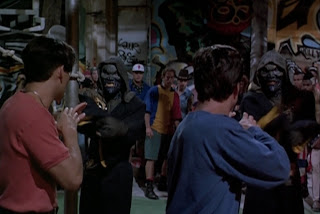 I don't understand what Robert Patrick was trying to accomplish by combining the amulet. That picture above is the best he was able to come up with after waiting the entire movie to posses both halves of it. He's supposed to be the richest man in the city, but all he ever talks about is one day having enough power to control it. Um, look around, dude. You live in the tallest high-rise, have paid lackeys all over the place, and you dress like Vanilla Ice. I think you're good.

Did I mention how much I just want to punch Scott Wolf in his face? It's not like he could do anything about it. Oddly enough, for him being one half of a dynamic ass-kicking duo, something inside me is not convinced that he actually knows any martial arts. Call it a hunch. All he does in the movie is wildly swing his arms around and act like a complete douche to everyone he knows. Oh, but it's okay, because he's a wiseacre. Mark Dacascos plays the "responsible" one.

They should have picked someone less athletically inclined over Dacascos, by the way. It's painfully obvious how much more skilled he is whenever there's a fight scene involving him and Wolf. That reminds me, if you haven't seen Brotherhood of the Wolf (no relation), you have my blessing to stop reading this review so you can fix that glaring error in judgment. If it spares you this train wreck, I take thank-yous in the form of Paypal donations.

The unfortunate thing is that the first half of Double Dragon is an entertaining train wreck. So many hilarious things are introduced that I don't care how stupid any of them are. There's an overly-long car chase involving a flamethrower-powered station wagon and some of the worst video-game-inspired graphics and car controls I've bore witness to, but other than that, the laughs keep coming. 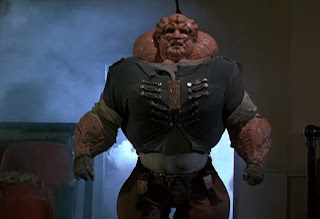 Once the plot is explained (ish), it wants to keep me invested, only it's too shitty to be able to do that effectively. At around 55 minutes, I'm already thinking ahead to what monstrosity I have to review next. There's not much to say, really. It just gets boring. Wolf's comic relief has already worn out its welcome long ago, and Dacascos -not that his career is exemplary - is totally slumming it.

I can't review Double Dragon without talking about Alyssa Milano, who's really and truly in this movie. She plays the leader of an underground group of rabble rousers who want to rid the city of all gang activity. Oh, yea. I forgot. The movie takes place in 2007, and heavy natural disasters have reduced society to, um, I'm not really sure. There are normal people, cops, and gang members. The gang members only come out at night, and the cops have a truce with them. None of that shit makes any sense whatsoever, but eh. It's a movie based on a game where the entire point is to walk from left to right, punching extras from Beat It in the face. You get what you get. Ah, but Alyssa Milano wants to change all that. I think the crux of her existence is to lull evil-doers into a trance by being as deceptively attractive as humanly possible. Seriously, her choice of wardrobe almost makes me second guess how gorgeous she is. As my wife said when I showed her a screen cap, "She looks like a hot little boy." 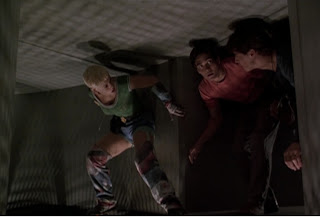 Not cool, Alyssa Milano. Those house painter's leg wraps and Eminem haircut do not do you justice. 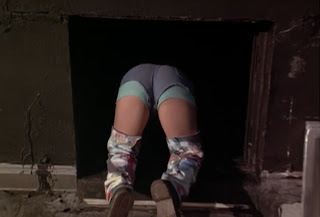 ...although, most things in life can be overlooked under certain circumstances.

Even the mighty gravitational pull of Alyssa Milano's ass cannot save this movie from starting out hilariously bad but ending up just plain ol' bad. The initial shock of crazy wears off way before the end credits roll, so what's left is a jumbled mess of filmmakers bullshitting their way through a non-story story. It can be fascinating to watch if you're in the mood, but the charm won't last unless you're either tripping balls or writing a research paper.

Next week, I'll be reviewing Street Fighter, and I'm honestly stoked about it. I have it on DVD, but I haven't watched it in something like ten years. You can look forward to me admiring Van Damme a lot and remarking on how they should have cast a more established actor to play Bison. Until next time, here's to Alyssa Milano's pastel-covered ass.

Email ThisBlogThis!Share to TwitterShare to FacebookShare to Pinterest
Labels: Action, Comedy, You Got Some Video Games in my Movies

Hello, My Name is Not Inigo Montoya

But I'm pretty sure you killed my father. Prepare to die.

You Can Also Find Me At: